Here in the West Michigan area where we live, honey bee swarming season begins in May and runs well into June.   Residents are often startled to find a large cluster of bees (can be as small as a softball or larger than a basketball!) hanging on a shrub or tree in their lawn.  Unfortunately, some will reach for their Raid or dial the local exterminator in a panic.  There is no need to panic however, as swarming honey bees are generally quite docile and will not be a threat to you or your pets if you leave them alone and simply call a local beekeeper to come and remove them. 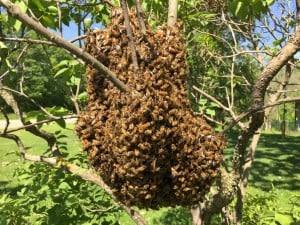 A swarm temporarily bivouacs on a lilac shrub as scout bees roam the neighborhood looking for a place (e.g., a nice dark cavity) to set up house permanently.

People typically respond in one of two ways to seeing thousands of bees clustered on a tree in their yard 1) recoil with horror at the beepocalypse that is apparently taking place in their front lawn. 2) lean in with curiosity and fascination at the sight.   We’d like more people to respond in the latter fashion, so let’s take a look at what is actually going on here.

First of all, realize honey bees are a social insect that live together as families (e.g. colonies).  Honey bee reproduction happens at a couple of distinct levels in this context.  First, each colony (normally) consists of one queen (a female bee with fully developed reproductive organs), a number of drones (male bees – population varies by season) and thousands of worker bees (infertile female bees).    The queen lays 1500 – 2000 eggs daily during the peak reproductive season.  These eggs hatch as larvae, eventually pupate and emerge as adult bees.  This can be thought of as bee reproduction at a micro level.  However, in the spring time, honey bees reproduce at a macro level via the swarming phenomena.  The colony builds up at a rapid rate and the mother queen will eventually leave the colony along with a third to two thirds of the workers in a swarm.  When you see a swarm of bees hanging on a shrub in your yard, they are basically bivouacked while a number of “scout” bees are out on reconnaissance missions, looking for a new place to setup shop – basically a hollow tree, abandoned beehive, or possibly a soffit or wall in your home!   How long they will remain there depends on how quickly the bees decide where to go next.  The democratic process they follow (no kidding) was recently documented by Dr. Tom Seely in a fascinating book – a great read for anybody, not just beekeepers!

Meanwhile, back at the original colony one or more swarm cells (formed by feeding a female larva a high protein diet) will hatch as virgin queens. One of these daughter queens will eventually prevail over the others, will mate and become the new mother of the original colony.  Hence, just as a cow calves and now you have two animals, a honey colony swarms and now you have two colonies.

We beekeepers of course would like to keep the bees in our boxes, and not have them end up in hollow trees!  Hence, prior to the swarm season arriving, beekeepers proactively split their colonies as a swarm prevention method.  The split simulates a natural swarm and takes a populous colony and reduces it to two or more smaller less populous colonies.  With a reduced worker population and ample space to grow, the colony is less likely to swarm, though with bees there are no guarantees!   One can break his/her back for hours splitting colonies, only to discover swarms hanging in trees around the apiary on the first warm day after a period of rain!So there you have it – why bees swarm in simple terms.  So what should you do if you see a swarm of bees in the spring?  If you are within 15 miles of the Coopersville, MI area go ahead and give us a call and we will be happy to come and remove them.  If you are elsewhere in Michigan consult the Michigan Beekeeper Association’s Swarm Map and find a beekeeper in your area.  If you are beyond Michigan, there is also a national honey bee swarm removal directory you can consult.