Last year we attempted to raise our own queens via grafting and didn’t meet with much success. The only way we seemed to be able to raise our own queens was to simply split in the Spring and make sure the queenless side of the split had young brood to raise their own queen with. This however didn’t give us much ability to do selection on which stock we wanted to propagate. This past Spring we attended a convincing talk by Jerry Freeman at the Michigan Beekeepers’ Association conference, entitled “Backyard Queens”. You may have heard of Jerry before, as the originator of the Freeman Beetle Trap carried by Walter T. Kelley. What struck me right away in Jerry’s method is the fact that it does not involve grafting, and that if followed carefully it seemed to eliminate many of the variables we’ve not been able to control in prior attempts.

Our motivation for raising our own queens is to try to select stock from our own apiary that winter well and tend to carry lower mite loads.  Eventually we would like to eliminate the need to buy replacement bees every Spring.  We’d like to raise queens during the summer and requeen with our own queens late summer.  After hearing Jerry’s presentation we decided to give his method a try. 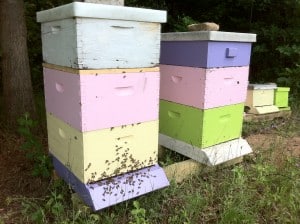 Preliminaries: As instructed, around 8-9 days before “cell punching”, we assembled a cell builder hive from our existing colonies. This involved selecting a strong hive to begin with, and then placing within it 5 full frames of brood that was in the process of hatching. This ensures a critical mass of bees between the age of 5-15 days old – the age at which the bees reach peak royal jelly production – a substance needed to rear queens.

Day 1 – Cell Punching: Prior to cell punching, we went through our cell builder hive and removed any uncapped brood, as well as the queen. Removing the queen will cause the cell builder hive to go into queen rearing mode, and removing the uncapped brood will ensure that they build only on the cells we provide them.   In this method, instead of lifting out a young larva with a grafting needle and placing it in a starter cell, we are going to punch out the entire cell containing the larva.  Freeman’s kit comes with a punch tool (originally from Australia). In lieu of the tool you could probably make your own or even use a sharp narrow pointed knife.  To facilitate punching and mounting of the punched cells we took a small Coleman camping store to the apiary with us.  Prior to punching we heated up the punch tool by placing it in boiling water – the same water we used to melt beeswax for melting.  We punched out 30 cells in all – 15 from our Russian hybrids, and 15 from our Italian stock.  We chose both of the “parent” colonies based on the fact that they wintered well and carried lower might loads on average than other colonies in the yard.   Once the cells were mounted on the cell bar frame we placed it in the broodnest of the cell builder colony.  All done, at least for now!

Our portable cell punching table – a couple of empty hive bodies and a coleman stove.

The cell punch tool let’s you punch out the entire cell for placement in the cell builder. 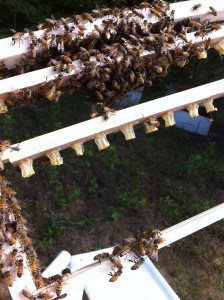 A bar of punched cells mounted on the cell bar frame and ready for insertion into the cell builder hive. Each cell has a < 24 hour old larva.

Day 4: Just out of curiosity I opened the cell builder a few days later, to verify that the bees had accepted our cells and were rearing queens.  Sure enough, most of the cells were being drawn, with the exception of the ones on the ends of the bars. 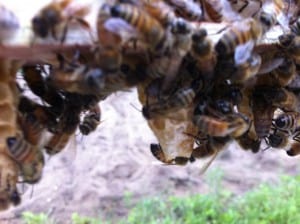 Four days later we inspected the cell builder hive and confirmed they had accepted most of the cells we had provided.

Day 11- Setting up the Mating Nucs:  On Day 11, I assembled 10 5-frame mating nucs.  For each of these I inserted a frame of brood, and a frame of pollen/honey, and the remaining 3 frames as foundation.  I placed the nucs around 2 miles away in another yard.   Late that afternoon, I returned to the cell builder and removed the cells and brought them over to the mating yard.  Out of the original 30 cells punched, we had a total of 20 ripe queen cells.  This probably wouldn’t be a very successful take rate for a commercial queen raising operation, but we were pretty happy with the results.  The problem I now faced is that I only had 10 mating nucs!  I thought about putting the extra ripe cells into the honey supers of our stronger colonies with older queens, but instead decided I’d double them up in the mating nucs just to make sure we ended up with a healthy queen in each.  I’ve often noticed when doing splits that bees will easily raise 5-10 queen cells in the queenless side and ultimately you end up with one laying queen in a few weeks.  Knowing this, I figured it wouldn’t be a problem to put two ripe cells per nuc and let natural selection happen.

Top bar frame with ripe cells, and some extraneous comb! 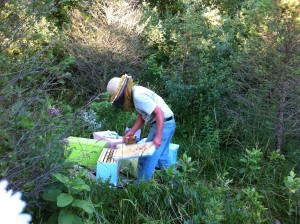 Inserting cells into the mating nucs. We doubled them up as we had more ripe cells than nucs. 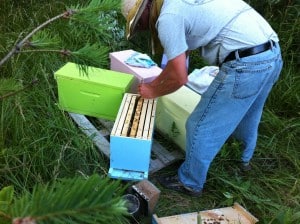 We had more ripe queen cells than mating nucs, so we doubled them up placing 2 cells per nuc.

Day 18 – Checking for queens: We could hardly wait to go out and see what had become of our handiwork.  On Day 18 we went out to the mating yard to inspect the nucs.  Out of the ten nucs we were able to locate young virgin queens in seven of them.  The queens are not yet laying and actually rather hard to spot as they aren’t much bigger than the worker bees.  For the three we couldn’t find queens, those may have actually been out on mating flights, or simply overlooked.   Later this week we hope to go back and find a laying queen in each nuc.  We’ll post an update at that point.

A beautiful virgin Russian queen. Hopefully she will mate and be laying a good pattern within the next week or so!

Interested in Beekeeping?  Read the first article in our beekeeping tutorial: So You Want To Be a Beekeeper?