The honey has been harvested, but there is still plenty of work to do in the bee yard.  A large part of that work in these waning days of summer involve us helping the bees get ready for the long Michigan winter.  In addition to making sure the bees have enough honey stored for the the long months ahead, a top priority is that the bees in each colony are healthy.  This is in fact perhaps the most difficult and challenging aspect of beekeeping these days.  There are numerous factors involved in keeping honey bees healthy these days.  In our area, one of the biggest challenges is combating the varroa mite.   This parasite can wreak havoc on an otherwise healthy hive and/or an entire apiary in short order .

Since the varroa mite appeared in N. America in the late 1980s, beekeepers have engaged them with all kinds of weapons.  For a number of years, we used different types of miticides to eliminate mites in our hives.  This approach became ineffective as years went on, when the mites became resistant to these treatments.  There is also the relatively unknown effects of these miticides on the honeybees themselves, and the potential of contaminating the honey and beeswax that is harvested from the hive.  In light of these facts, two years ago we abandoned all miticides and have adopted integrated pest management (IPM) practices with our colonies. 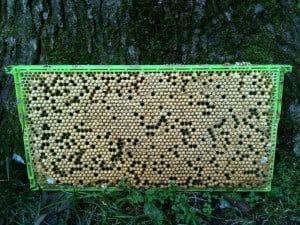 Our approach involves a number of interventions, including open mesh flooring (OMF), hygienic bees, drone traps, and sugar dustings.  These techniques taken together and applied correctly have thus far proved effective in combating the mites.  Perhaps the biggest thing we had to get used to is that unlike miticides which involve a sort of zero tolerance perspective. With IPM we have to learn to tolerate  low levels of mite infestations in our hives, but the goal is to interrupt their biological cycle to the extent that they never become numerous enough to have a significant negative impact on the overall health of the colony.  While the IPM approach doesn’t involve expensive chemical treatments, what we have learned is that it involves a significant amount of labor and carefully choreographed interventions guided by precise record keeping at the individual colony level.

Open mesh flooring. This intervention involves having a screened bottom board on the colony rather than the traditional solid wood.  This is actually the first year we’ve moved our colonies onto OMF.  We are using Walter T. Kelley’s product. This approach in theory has two advantages.  First, they help eliminate mites in that when mites drop from above (due to bees grooming or otherwise) they fall through the screen flooring below and perish before they can re-enter the colony.  Second, this approach provides better air flow/ventilation within the colony which is very important in most climates.

Hygienic Bees.  As we’ve written elsewhere on this site,  we’ve had success with the Russian Hybrid strain of honeybees.  These bees have been raised from stocks that have genetic qualities from bees taken from Eastern Russia, where the varroa mite has been present for almost 150 years.  Traits have evolved among these bees that make them more resilient with regard to mites, including grooming, and sensing/removing mites maturing in brood comb.   We’ve found these bees are good honey producers as well, but in some ways are very different from the Italian bees we were more used to.  For one thing, their clusters remain quite small in the Spring, but then their population explodes very quickly once forage becomes plentiful.  This means we had much less margin of error when it comes to giving the bees more room (e.g. supering).   They seem to have a much stronger swarming tendency.    We also find them to be a bit more ornery than the strains we had used before, especially on overcast muggy days.   I don’t know if this is an overall trait of the Russian bees, or it just happens to be the strain of bees we’ve been using.

Drone Traps.  The adult female varroa mite prefers to lay her eggs in drone comb over worker comb.  We can take advantage of this by encouraging the bees to draw out frames of drone comb in a colony and then removing/destroying these combs once they are fully capped over.  In our experience, this seems to have the biggest positive impact on interrupting the mites’ reproductive cycle  However, its a double edged sword, in that if the drone traps are not cycled and the right time your effectively helping to optimize the mite reproductive cycle by providing them ideal habitat!  This is where good record keeping comes in.  We keep careful records on the status of the drone traps in each individual hive, so at any given time when we visit the apiary, we have a fairly good idea on which traps need to be cycled.  To accomplish this intervention, we simply place a medium of shallow frame into a full-depth brood chamber.  The bees will draw a 3-4 inch drone comb on the bottom, which we can simply cut off once capped, and immediately replace the hive.   This year we also tried the full depth green plastic drone combs that are available at various suppliers.  While these do the job, we find they are a bit more work in that we have to bring them back from the apiary, freeze them overnight and then remove the combs with their dead larva and mites with a pressure washer, before reinserting into the hive. 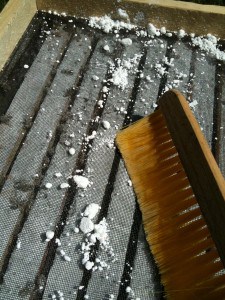 Sugar dusting a colony by pouring powered sugar on a screen over the open hive, and brushing it in between the frames.

Sugar Dustings. The idea is to dust the colonies brood combs with powered sugar.  The sugar dust makes it difficult for the bees to maintain their grip on bees/combs, and they fall down through the screened bottom. In addition, as the bees actively groom themselves and clean up their combs, adult mites are dislodged as well.   There are mixed opinions on how frequently colonies should be dusted, but this time of the year (e.g. late summer / early fall) we are dusting on a weekly basis.  You can also get a handle on how severe a mite infestation is while dusting if you put a whiteboard under the screen.  If you have mites, usually they’ll be dropping onto the whiteboard within minutes after a dusting.

So far we believe the IPM approach has been effective for us, though it might not be for everybody.  The amount of labor involved would definitely be an issue for a large commercial beekeeping operation.  At the same time, entomologists and beekeepers are constantly learning more and introducing new techniques and refining existing ones.  It’s worthwhile for every beekeeper large and small to keep abreast of these developments and adopt them in their apiaries as enabled, even if its initially on an experimental level with a few hives.