August is the month we remove surplus honey from our colonies.  We started the process last week, and plan to remove the last batch this week.  This was actually one of our better years, given the combination of an abundance of moisture and warm sunny weather.   By now most of our comb honey has been harvested.  The honey we are currently harvesting will be extracted into liquid form and bottled.

The first task is to remove the bees from the supers that are heading to the honey house.  This is accomplished with a powerful leaf blower.    The bees will get blown off the combs in front of their hive, and crawl back (uninjured) into their home, leaving the super and honey free of bees and ready to be loaded up. 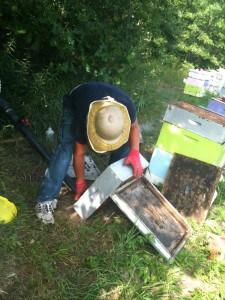 We used to use full depth supers for extract honey, but have gradually moved to all medium and shallow depth supers.  While the full depth supers can be more efficient in terms of uncapping/extraction, they are VERY heavy when full of honey (80-90 lbs).  We’ve found the shallow/medium depth supers to be much easier on the back and also give us finer granularity of control when supering during the Spring and Summer months.  We can also use the same equipment for our cut comb honey production, and in fact we typically put our comb honey frames right in our fully drawn extract supers.  We believe we get more comb honey using this approach than putting entire supers with thin surplus foundation on a colony.  In a sense we are spreading out comb honey production across all of our colonies (a more labor intensive activity for the bees, since the foundation needs to be drawn) instead of having a smaller number of colonies do all the comb honey production.  We normally remove the comb honey frames as soon as we see they are capped, as leaving them in the hive to long risks having the bees “dirty” the combs as they traffic over them to the combs above.  However, we always have a few comb honey frames left in the hive by the time August arrives, that we remove with the extract supers. The only extra effort for us is to sort out the comb honey frames in our extract supers once they are in the honey house.  We facilitate this, by marking the top bars of the comb honey frames (with a big “CH”) when we install them, making them easy to visibly identify. 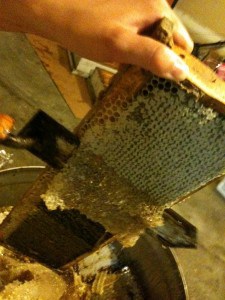 A frame of honey is uncapped with a hot knife prior to extraction.

We deliberately choose hot days to extract, as it makes it a easier to get the honey out of the frames and through a raw screen filter.  The extraction process involves first uncapping the sealed frames of honey with a hot knife.  The layer of beeswax removed and a fair amount of honey fall into a capping melter and eventually drain into a stainless separator that separates the melted liquid wax from the honey. The uncapped frames are then loaded into an extractor which spins them at high speed, removing the honey via centrifugal force.  The liquid honey is drained from a gate at the bottom of the extracted and passed through a raw screen filter.  We later will heat the honey just enough to pass it through a fine filter prior for bottling. The whole process is a rather sticky affair, and when the kids get involved, things get sticker yet!

Goldenrod is just beginning to bloom in our area.  It produces a stronger darker honey and for the rest of the summer the honey our bees produce is left for them to consume over the winter months when they cluster in their hives to keep warm. 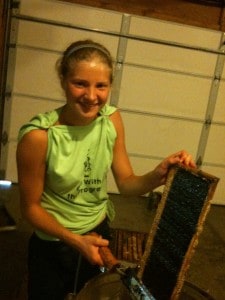 Marie has a "sweet" job!

One question we are often asked is how much honey can a colony of bees produce in a season?  The answer to that question is that it really depends on a lot of factors.  For example, a wintered over, established colony typically is more productive than a new colony started in the Spring from a package or nuc, as they tend to build up strong before the nectar sources become available.  The weather also plays a dramatic impact.  An overly dry or wet summer can negatively impact the bees ability to gather nectar.  Finally, there are also many other challenges bees face, such as mites, foulbrood, pesticides applied to the nearby orchard, etc.  A healthy hive can take a turn for the worse over night, so all these factors play into how much honey your apiary is going to produce.  In our area we typically average somewhere from 0 to 100 lbs per colony.    Some colonies will produce over 150 pounds each, but others bring down the average by producing a mere 25 lbs or none at all!