What Bees and Their Keepers Do in the Spring

Springtime is arguably the busiest time of the year for both the honey bee and the beekeeper. From the bees’ perspective, the activity begins before Spring actually arrives. In late winter, as the days increase in length, the queen will resume laying eggs. Slowly at first, as the adult worker bee population that has wintered over has began to dwindle and their ability to maintain the prerequisite temperature in the brood net (90-95 degree Fahrenheit) will be prohibitive, should the brood nest get to large. As the temperatures warm and the first pollen sources become available (maple, pussy willow, etc. in our area) the colony will need a stable population of worker bees to forage for pollen, a key component in raising more brood. As the days lengthen and these early sources of nectar and pollen become available to the colony, it actually stimulates it to produce more and more brood. 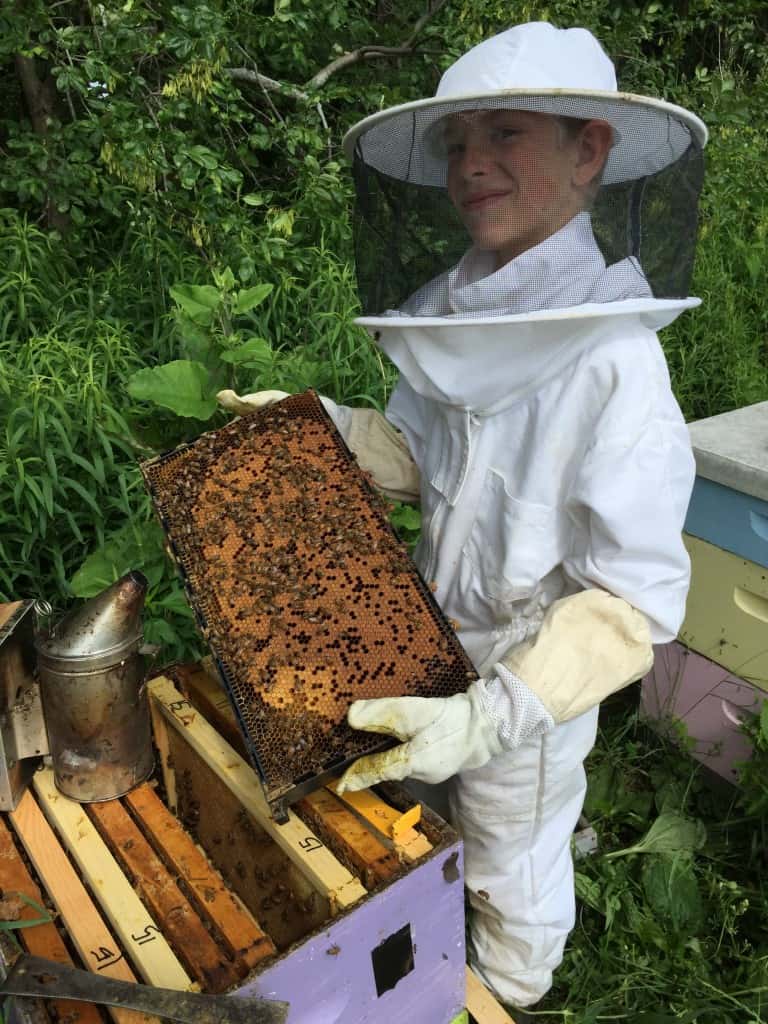 Luke inspects a colony late spring, to assess its health.

The goal of the colony at this point is not only to have a large population of worker bees to carry out the various roles within a healthy colony, but the colony itself is a super-organism, and has a natural tendency to reproduce at the colony level. This phenomenon is referred to as swarming, a situation in which the old queen flies off with a considerable proportion of the adult bees in the colony, leaving behind a daughter queen to become the mother of the original colony. Thus one colony has now become two colonies. 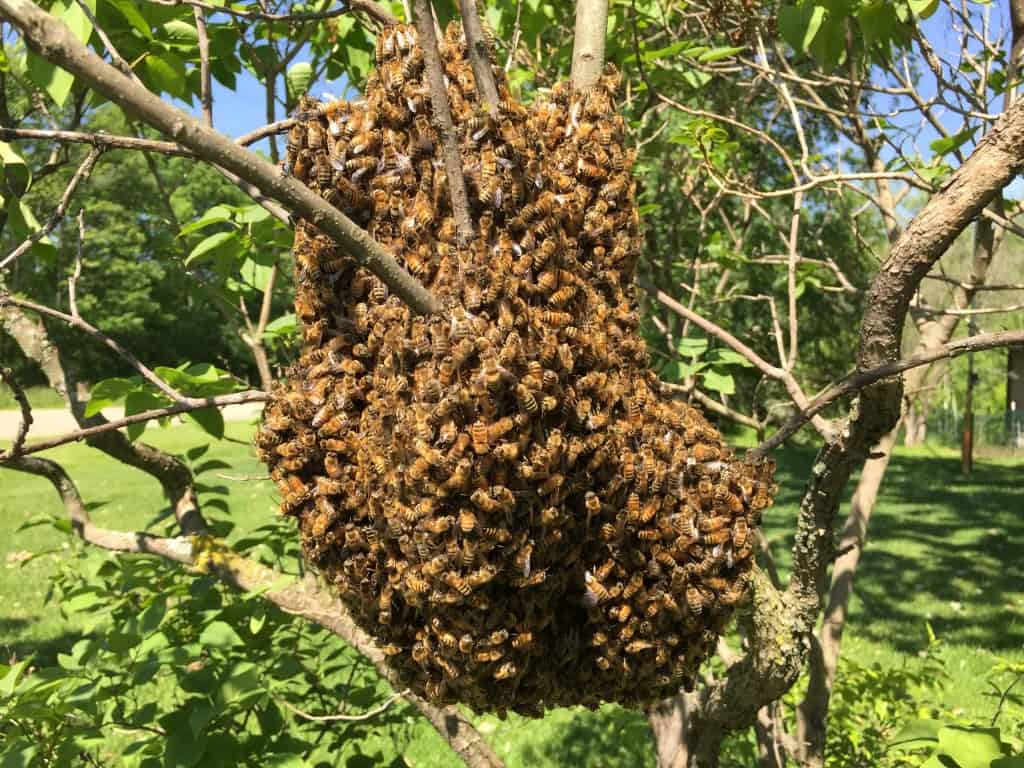 A swarm temporarily bivouacs on a lilac shrub as scout bees roam the neighborhood looking for a place (e.g., a nice dark cavity) to set up house permanently.

For the beekeeper this level of reproduction is equivalent to that of a cow having a calf for the dairy farmer, with a few complicating caveats. For one thing, the swarming event is not contained within the confines of a dairy barn. Instead, it happens out in the field, and the swarm that is cast from the colony will go wherever it will. Perhaps in that hollow old tree trunk a mile or two distant, or worse yet in the soffit of a nearby home! Also, unlike the birthing of a calf event that can be calculated within a day or two, predicting when a colony will cast a swarm in the spring has a bit more variables. It depends on the relative health / buildup of the colony, which typically depends on the weather which (especially in Michigan) is near impossible to predict. As awesome (and mysterious) the swarming event is, in recent years, scientists have made rapid strides in deciphering what exactly is going on within the colony. Dr. Thomas Seely’s recent book Honeybee Democracy

is an absolutely fascinating read on the swarming event. If you’re into technology, my good friend Huw Evans over in the UK will sell you electronics that utilizes acoustic data gathered within the colony overtime, to predict when your colony will cast a swarm.

That brings us to the beekeeper himself/herself.  Whether you’re a commercial beekeeper or a hobby beekeeper, one of the activities that will keep you hopping is preventing your bees from swarming in the spring.  The typical approach here is to spit the colony before it commits to swarming.  Splitting the colony alleviates the conditions that give rise to the swarming impulse (overcrowding, lack of space) and instead of losing half or more of your bees you now have a couple of colonies in place of one. 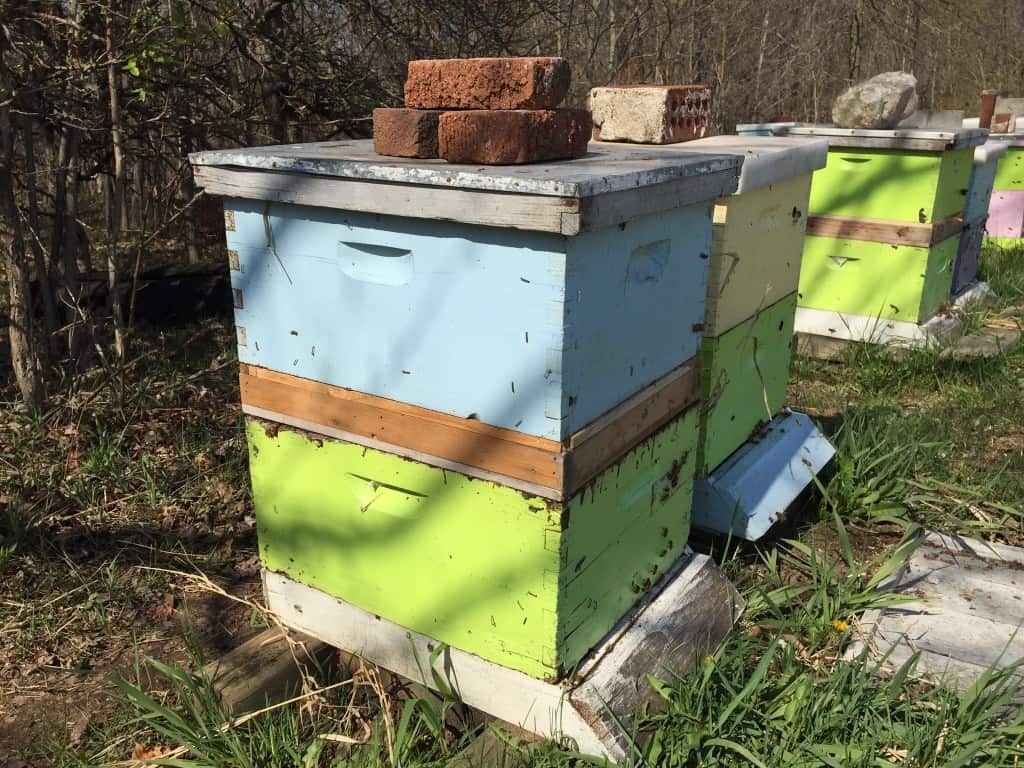 We like to do double screen splits as we don’t have to spend time finding the queens, and the splits can keep warm on colder nights.

However, before swarming season is upon us, beekeepers are typically assisting the bees in early Spring to amplify their ability to increase their populations.  Often in late winter / early spring we will be giving bees pollen substitute patties so they have ample nutrition to raise brood on before the natural pollen sources are available for forage.  In addition, if a surviving colony is light and there are no natural nectar sources yet available, we will feed the bees sugar syrup to help stimulate brood rearing and of course to avoid losing the colony to starvation.    Early spring is a key time for the beekeeper to be out in the bee yards making sure the bees don’t starve just a few days before nectar sources become available.   A lot of bees are lost this time of the year when the beekeeper isn’t paying attention.  Regular inspections of the colonies is a routine part of the beekeeper’s springtime activity – basically making sure each colony has a healthy laying queen and plenty of nutrition. 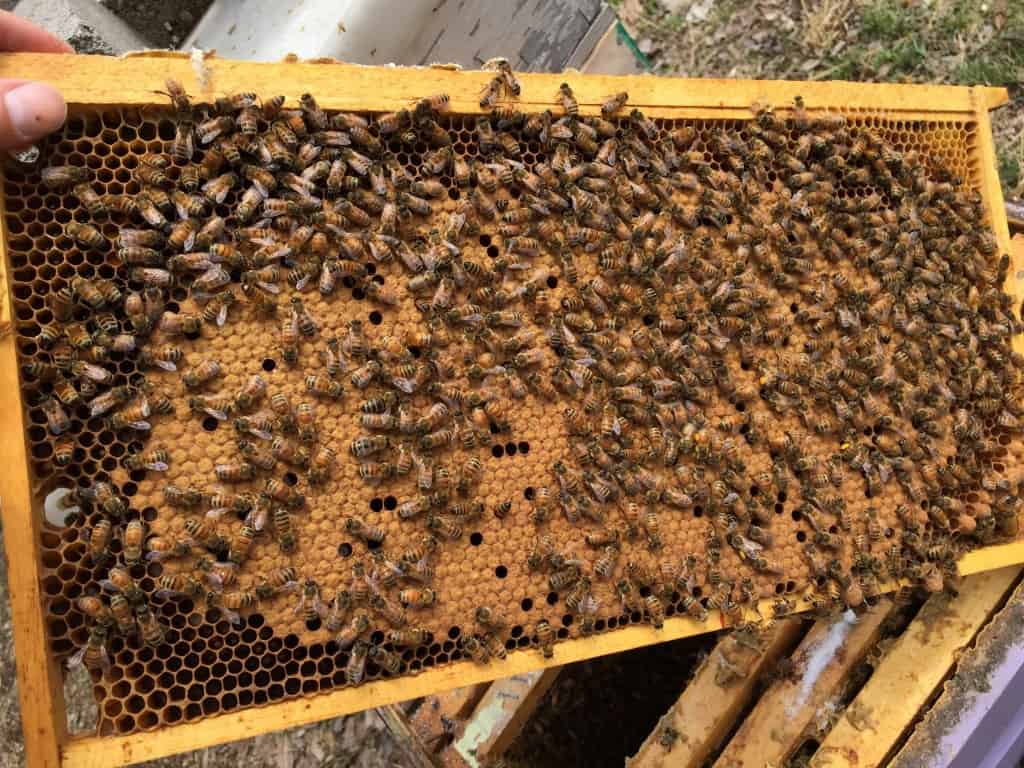 A nice healthy frame of brood in the spring.

Another task we tend to find ourselves doing a lot in the spring time is assembling bee equipment, frames, hive bodies, supers, etc.  Every year we tend to end up with more and more bees which requires more and more equipment.  While we like to do this work during the winter when there isn’t much else to do, often we get behind and end up doing a bit of this during the spring as well.   We like to rotate out around 20% of our oldest frames annually, so no matter if we are expanding our apiaries or not we always have a lot of frames to assemble.  Since our shop is not exactly heated, we tend to not install the wax foundation into the frames until the temperatures outside are a bit warmer, which in Michigan doesn’t happen until April / May! 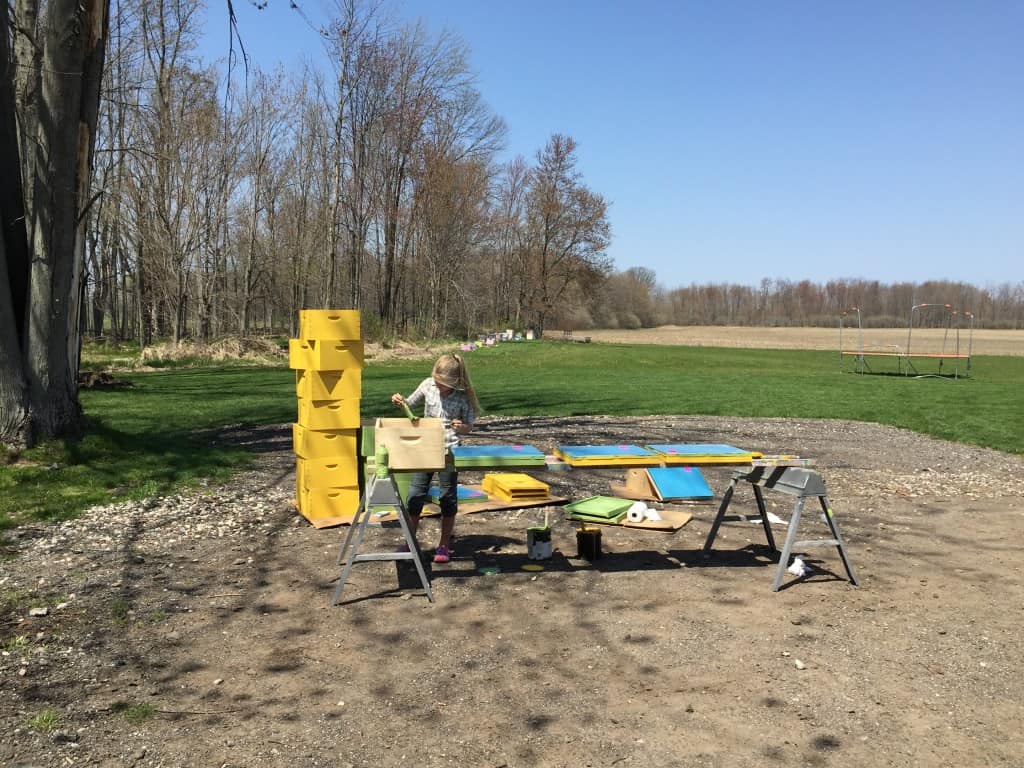