This past Saturday I was reminded once again on how fragile the world we live in is, and in particular, how quickly things can go wrong in the apiary. I had just cracked open the cover on the last hive I intended to split in our home apiary. It was a robust Italian colony with a very prolific queen, that badly needed splitting. After pulling a frame of honey on the edge of the broodnest in the top hive body, I got lucky and discovered the large beautiful queen scurrying around on the first brood frame I pulled. She was unmarked and when reaching for my marking pen I suddenly realized I had forgotten to pocket it when I headed to the apiary early that afternoon. Not wanting to pass up on the opportunity to mark her while I had her located, I set the frame down against an adjacent hive and trotted over to the garage to fetch my marking pen. I arrived back pen in hand a couple of minutes later, only to discover the queen no longer seemed to be on the frame I had removed. I spent an extra minute scanning the frame for her but eventually concluded there was no place for her to hide on this comb – she was definitely not on the frame. I then proceeded to scrutinize the ground and side of the hive I had leaned the frame around, but still no queen. Then I suddenly had this “I hope she didn’t do what I think she did…” realization – as I glanced at the front of the hive my suspicions were confirmed. There was a ball of very aggressive bees clustered on the landing board. Shoot!

Basically, the queen had climbed off the frame, onto the hive, and around the corner and straight into the entrance. The problem was, this was not her colony! She was unwittingly trespassing in the neighboring hive, and the residents did not take to it kindly. I scooped up the ball of bees (I was wearing leather gloves) and slowly picked off (and squished) the aggressors in an attempt to rescue the queen who was sure to be in the middle of this melee. Sure enough in the middle of the ball was the hapless queen. She was still alive, but not looking very good. Suprisingly enough, her wings were still intact, as were all her legs. I placed her back on a brood frame from her colony, and instantly her home hive paramedics went frantically to work on her. They massaged her body, and tried to revive her (see video). Their behavior was amazingly different from what she had just experienced at the mandibles of her neighbors! I suspect even if she survives, she won’t be keeping up with her past performance, the colony’s overall worker population will be impacted negatively, and her daughters will soon supercede her with a new young “super” queen. The sad thing is that the problem was caused by “bad beekeeping”. Usually when I am doing splits and I locate a queen I will put the frame she’s on in a small nuc box and keep her there until I’m finished. I was in a hurry, and leaning her frame on the side of a neighboring hive and leaving it unattended for a few minutes cost me a nice queen. 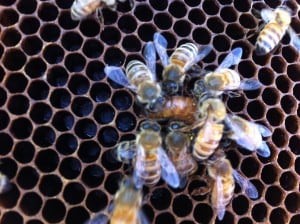