Winter was late in coming this year, but once it arrived you couldn’t miss it!   This morning I was reading the weather outlook in the Michigan Farm News (written by Jeff Andressen the meteorologist with the MSU Extension) and if they have it right, the recent upper air troughing pattern across the Great Lakes will soon be replaced by a southwesterly pattern which will provide an extended thaw for at least part of the state.  Along with it however, they are also predicting more precipitation!

While late February is still to early to be wishing for spring here in Michigan, we’re thinking the bees are getting a bit antsy. You see, unlike cows, pigs, and other types of livestock with little in the way of scruples, honeybees prefer not to relieve themselves within their living quarters. Normally, honeybees will periodically take what is called a cleansing flight outside of the hive and relieve themselves before returning home. We did have a warm sunny afternoon early in January which allowed the bees to take flight, but since then we’ve had an extended stretch of cold snowy weather without any relief. While the bees are clustered inside the hive, they consume honey to maintain a steady temperature between 94-98 degrees Fahrenheit. All that honey consumption means eventually they reach the point where they really gotta go! Normally we get a warm afternoon or two in February where its a sunny 40-50 degree day and the bees can fly, but that has yet to occur and we’re almost to March. 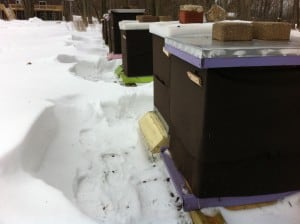 This afternoon we took a short stroll in our home apiary. While it was a rather cold overcast day, there were a few desperate ladies taking wing to relieve themselves. Unfortunately the few of those who attempted this were soon laying in the snow in front of the hive. All of the colonies are still alive and have sufficient stores to make it to warm weather, but we really do need at least a brief thaw so they can cleanse themselves. 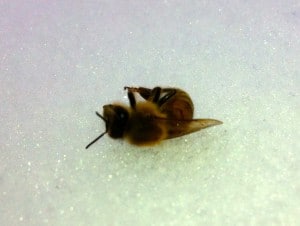 The few bees who tried to fly this afternoon didn’t make it very far.

Last year (2012) we actually planted grass during the “March heat wave”, when temperatures reached an unbelievable 86 degrees here in Michigan. This turned out to be a disaster for the fruit growers who later lost most of their crops due to a May frost. It also meant a very swarmy spring for beekeepers, which is good and bad, depending on your perspective. Looking out the window right now it seems that the prospect of planting grass in 80 degree weather within 3-4 weeks is a bit unrealistic, however its fun dreaming about it. 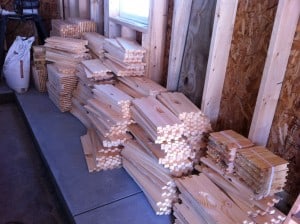 The winter months are a good time to assemble hive bodies, supers, and frames.

For now however, all we have to combat our spring fever is a large stack of supers and frames that need to be assembled, and of course the Michigan Beekeepers Association Spring conference 2 weeks from today.