Swarming season is in full swing here in W. Michigan. Friday morning while working in our own apiary I witnessed a couple of swarms taking off, even though our colonies have all been split. Some have been split into three, but that didn’t stop those old queens from taking off. I followed them both across a very muddy corn field, but gave up after they crossed over a really wet spot. One of the swarms was particular interesting. It issued forth from the hive around 11:15am, flew around 15 feet into the air and then abruptly re-entered the hive they had just left. Around 11:45am they issued forth again and this time landed about 15 feet up in the notorious pear tree (we’ve practically killed ourselves catching swarms out of that tree in the past). After hanging out for an hour or so, they took flight again and once again eluded me over the soggy corn field. Though we try to keep our bees from swarming as much as possible, it is always impressive to see them take off. You always hear them (sounds like an 18 wheeler going down the highway!) before you see them. Around this time, our phone and email queue started buzzing with other folks in the area with swarms in their yard that needed removing.

First stop was Miriam’s home in a residential neighborhood in Kentwood – the first call of the season for us. This swarm had actually been hanging on Miriam’s bird feeder for a couple of days already. This swarm was quite straightforward to hive as we were able to unwire the bird feeder from its mount and simply shake the bees into the hive. Miriam was nice enough to send over the photos which we’ve included below. Miriam’s backyard by the way was really beautiful – lots of native plants, etc. Bees know what they are doing when they pick a place to land. 😉 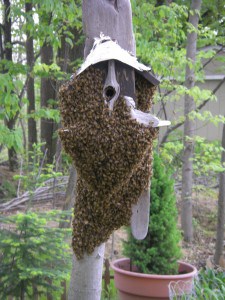 Nice swarm that decided to land on Miriam's birdhouse. The birdhouse was made of Lake Superior driftwood. I think the bees were thinking about staying! (Photo courtesy of Miriam N.) 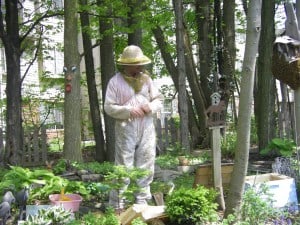 Suiting up and getting ready to hive the swarm. (Photo courtesy of Miriam N.) 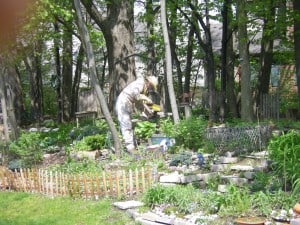 A good shake and their in the hive - just like pouring cornflakes out of a box. A few stragglers get brushed in. (Photo courtesy of Miriam N.) 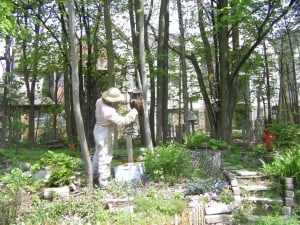 Misting them down with a little sugar water. (Photo courtesy of Miriam N.) 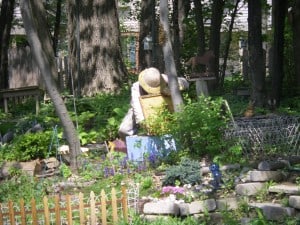 One down, one more to go! (Photo courtesy of Miriam N.)

Next stop was Kristi’s home over in Comstock Park. The swarm had lighted on a bush right under their front picture window. I’m amazed the homeowner even discovered it as it was nestled way deep into the bushes and not even visible unless you moved some of the foliage out of the way. This swarm was hived without incident as well.  My Swiss friend Pietro Brossi (a visiting faculty member at GVSU this past semester) tagged along and took some photos. 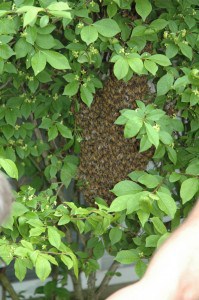 Swarm hanging in a shrub outside a Comstock Park residence. (Photo courtesy of Pietro Brossi)

Almost every box we have is currently filled with bees, so if this keeps up we might have to dig out those old leaky hive bodies that were destined for the campfire this summer and fill them as well! The mild winter has enabled colonies to build up strong with an unusual number of bees for this time of the year, so it’s likely we’ll see a few more swarms yet before its over. 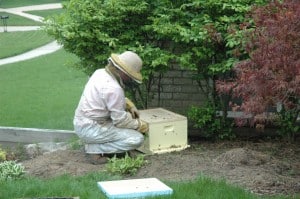 Swarm has been hived and will be transported back to the apiary. (Photo courtesy of Pietro Brossi)

If you have a swarm on your property that you want removed, give us a call. We will remove it for free if its hanging in the open and easily reachable. (616) 209-9BEE.