On a recent trip to South Africa I had an opportunity to check out the beekeeping situation there. The Honeybadger Beekeeping Equipment provider in Pretoria is an outfit that keeps and sells bees, sells honey and beekeeping equipment and also provides beekeeping training to locals.

Perhaps the biggest difference between what we beekeepers are used to here in North America and what is found in Africa is the honeybee itself. Here at home in the USA, the honeybee is a non-native insect originally brought over by the early European settlers. Our Western honeybee (apis melefera) is a good honey producer and also a reasonably gentle bee that is not difficult to work with. The honeybee in Southern Africa a sub-species of the Western honeybee (Apis mellifera scutellata) is also a good honey producer, but is also far more aggressive strain of honeybee. The African honeybee attacks with little provocation and in numbers that are sufficient to seriously inflict some fairly severe (potentially fatal) damage to the creature they are targeting. You may have read about “Africanized” bees (or “killer bees” as the media prefers to dub them) here in the USA.  African bees were inadvertently introduced into the wild on the S. American continent by an entomologist in the 1950’s. Since then they have thrived  and over time migrated north, eventually reaching the North American continent.  Since their arrival these bees have interbred with our Western (or European) honeybees. Strains of these hybrid bees with African traits are now found in some of the Southern states here in the USA. 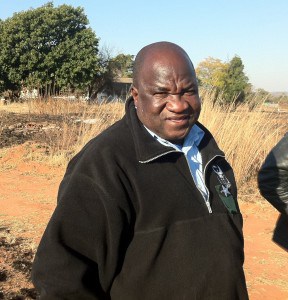 The S. African beekeeper at the Honeybadger that hosted our visit. Unfortunately I do not remember his name.

The S. African winter is milder than what many of us experience here in the northern regions of the USA resembling perhaps the typical winter in Florida or Arizona. Hence, beekeepers there experience multiple honey flows, yielding we were told average production per colony at around 175 lbs annually. A key honey producing plant is Aloe. The bees become particularly aggressive when this particular plant begins to bloom. While many of us work bees here in Michigan on hot summer days in our t-shirts, in S. Africa beekeepers typically wear multiple layered beesuits and thick gloves. The beekeeper we visited said when you drive into the apiary the bees will start hammering your vehicle immediately and you have to be fully clothed in your protective gear before you exit the vehicle.

The Honeybadger folks do not buy package bees like we do here in the northern states to replenish our apiaries after winter loss. Instead, they take advantage of the African bees strong tendency to swarm. The Honeybadger places around 400 swarm traps around the country side in the Spring when colonies are building up and swarming, and within three weeks most of these traps will house a swarm. Once the honey flow begins they will do 3-way splits on the colonies. The colonies build up very rapidly and are used to secure a honey crop and eventually are sold to hobby beekeepers, who also are able to take courses and receive mentoring by the Honeybadger folks. 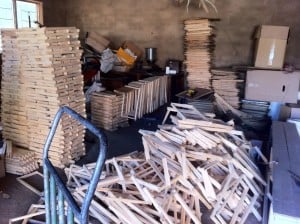 Beekeeping equipment is imported from a European manufacturer and assembled onsite by Honeybadger employees.

In terms of parasites, in addition to the usual culprits that we are accustomed to (e.g. the Varroa mite, American Foulbrood, etc.) the S. African beekeeper also has to deal with what is known as the Cape Bee. The Cape Bee (Apis mellifera capensis) is unique in that its workers can actually be fertile and lay eggs that develop into clones of themselves. In addition, these workers emit a pheromone that is practically equivalent to the pheromone emitted by an Apis mellifera scutellata queen. When African bees are kept where Cape bees are present, the Cape bee workers will enter an Africanized colony and become parasitic, laying clones of themselves that also lay. Soon the original colony is overwhelmed with these parasites. In some cases the bees will even kill their own African queen due to the presence of these parasitic bees emitting the same pheromone.

We were informed that there is essentially very little in the way of beekeeping equipment manufacturing in S. Africa. Honeybadger imports equipment from European manufacturers and assembles and resells it to S. African beekeepers. We found the prices of equipment to be considerably higher than what we typically find here in the USA. This was especially the case with the stainless steel processing equipment.

In the S. African supermarkets the situation is very similar to what we find here in the USA. Along with the locally produced honey (that sells at a higher premium) there are plenty of imported blend honeys from Brazil, Argentina, etc.

While we went out back to their local apiary and viewed colonies at a distance we unfortunately did not have the opportunity to actually open the hives and take a look. Our visit was rather late in the day and our host did offer us that opportunity if we would return the next morning. However, we were officially in S. Africa for church missions related work and our agenda prevented us from taking him up on this. This is also in keeping with my travel philosophy of always leaving incentive to take a return trip to countries you’ve enjoyed visiting!

S. Africa is a beautiful country, and well worth visiting. We are most grateful to the folks at the Honeybadger who took the time to visit with us and help us better understand the beekeeping situation there. If you’re interested you can visit their website online at: http://honeybadger.co.za/ 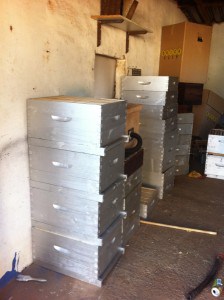 Assembled and freshly painted hive bodies. These will be filled with bees shortly as the South African swarming season will soon be upon them. 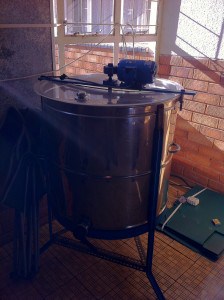 Beekeeping equipment (all imported) seemed quite pricey in South Africa. The stainless steel processing equipment in particular was very expensive.